Government classified our Hemmingsen-Cameron logging operation in Port Renfrew BC, including its management, as “essential” to the Allied war effort.1 That was due to export of the very finest Sitka Spruce to the UK, where it became a component of certain bombers.

After the war, the company was sold to British Columbia Forest Products and our grandfather, Matt Hemmingsen, retired. That was mid-1946.  Next is a little on our grandfathers.  It will be followed by our move to Newfoundland and our experiences in living and logging there.

Grandad James Dickson was preparing to retire too, from his position as Chief Inspector of Mines for BC.  He did so, early 1947. That both grandparents reached retirement together seemed genealogical fun. They had shared another pivotal time frame much earlier.

James was born in Scotland April 1882 and began his life’s journey with his adoptive family.  The last of his adoptive grandparents had recently died, so that his parents were the new “now generation”, stepping forth with their only child.

Coincidentally, six-year old Matt bid farewell to his beloved father, Ole, in April 1882. Ole left Norway alone, to establish himself in Wisconsin.2 He would bring his wife and children to the US over a five-year period. Matt, and his older sister were last, emigrating in 1887. 2

The die was cast for the future Hemmingsen-Dickson family; ours. About six years of age separated the grandfathers. Matt emigrated from the US to Canada in 1906 and James from Scotland, in 1911.1,2 They found themselves on British Columbia’s Vancouver Island.  One gentleman would distinguish himself in forestry and the other, in mining. Their professional statements had been well articulated as the 1940s crested.

With the family business sold, my father accepted employment in Newfoundland. We would move far from our close knit family. First, a word on our parents, and then the history of logging in Newfoundland before we arrived, and before its confederation with Canada.

Dad’s father was a “Woods Pioneer” according to one of his obits. But Granny held her own. Margaret Naysmith Alexander was waitressing in the Comox Valley on Vancouver Island when she met Matt. She had started work by fourteen, having lost her father in a coal mine disaster.

Mum’s father was imbued with a passion for mine safety and rescue as realized in his position of BC’s Chief Inspector of Mines. But Nana, Janet Gray McArthur, was already employed by fifteen, as documented when her family came to Canada from Scotland aboard the Grampian.3,4 Her outbound document cited her as a photographer, while her landed record indicated a domestic.

Our four grandparents had most humble hard-working beginnings. My parents were no less intense in their life journey than their own parents had been. “From The Logging Camps” pondered how it was that our remote logging camp, circa 1940, functioned with kerosene lamps, but had a crank telephone. *  The answer was provided by a snippet in a later employer’s company journal, circa mid-1950s; one of those “rah-rah” columns. Dad had included it in the business section in his book of our family history.1 It is quoted below.  He would have been about fifteen.

“During his school vacations, it was natural that he went to work for his father’s firm – and very often found himself “doing the toughest job in the show”. One of his first jobs out of school was clearing brush for a telephone line strung along the jungle-like West Coast of Vancouver Island. That happened in 1928 but the memory of it is still fresh with John.”

* The camp probably had access to generator electricity, but home night light was by lamp.

Our parents met at University of British Columbia. Mum got her undergraduate degree at 20, in Zoology and Biology and then completed her Master Degree.  Dad was a Forestry Engineer.  Here are their graduation pictures, with an extra for Mum, to defeat the artificial finger wave thing. (These are actually scans of pictures, then pictures were taken  of the scans.  So, fuzzy.) OK: because the originals are lost. 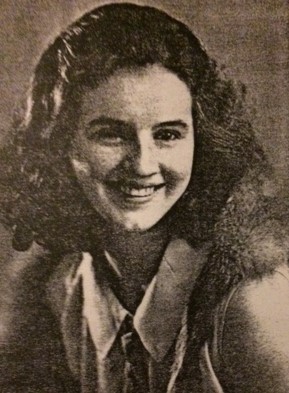 It is not clear how Dad traveled to Newfoundland, but he probably took a train. It was late 1946.  The trip was about 4000 miles or 6500 kilometers. The last blog post spoke to we-kids’ week-long ferry-train-ferry trip with Mum, to meet him there, just after the New Year.  Population of Corner Brook in 1951 was about 11,000.  A great big city to kids who came from the camp site revealed in “From the logging camps”

LOGGING IN NEWFOUNDLAND: BEFORE CONFEDERATION

The life of the logger is always deemed particularly difficult; that of the Newfoundlander surpassed, by far.

The Newfoundland and Labrador Heritage Web Site is enormously informative. They have graciously allowed permission to link to an amazing video. It is amazing in the first place, that video was captured in that day in the weather that was, at active work sites – and is preserved.  It is amazing for the portrayal of working conditions and the awesome people it depicts.  To view the video, click  “A Loggers Life Before Confederation”

LOGGING IN NEWFOUNDLAND: AFTER CONFEDERATION

Newfoundland confederated with Canada in 1950.  The video ends indicating that logging was to go forward with mechanization and chainsaw. That is where Dad came in. His new job was “Manager Mechanical Logging Methods Development” for Bowater Newfoundland Pulp & Paper Company (Canada). 1a Here is a description of the job extracted from his Family History volume.  This was meant for family interest. 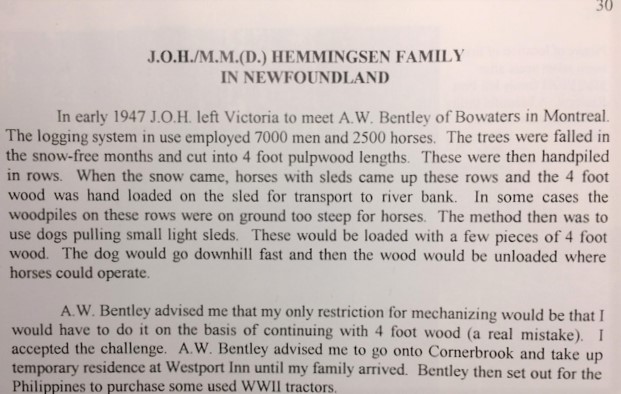 Here is a set of abstracts on the mechanization process. 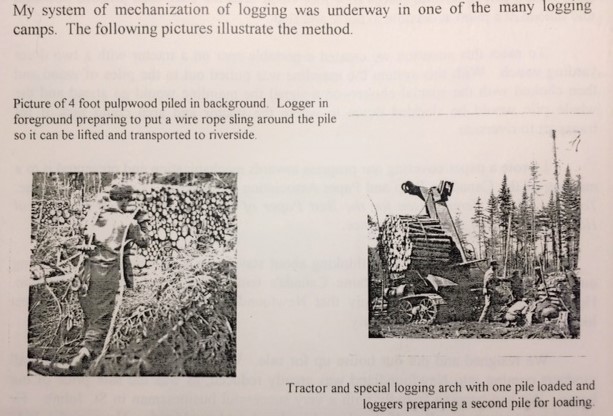 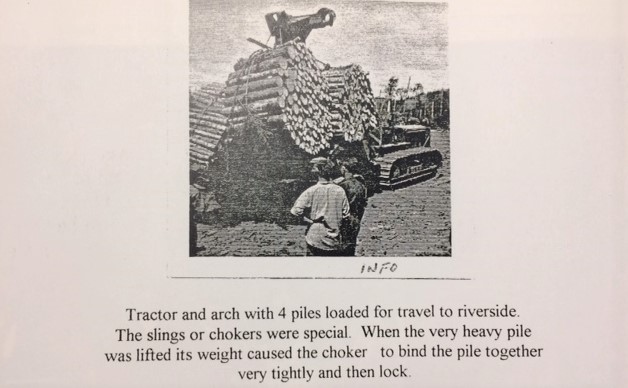 The next post will cover our life in Corner Brook, NL, from the late 1940s to just after confederation in 1950.

Buttons are provided below  for Amazon & BookLocker.   BookLocker has shipping options for rural addresses.