Dad did a family history with intent to cover his, and our mother’s ancestry.1 He wrote

mostly of his memories, but hired professional genealogists to document what came before. They outright failed his father-in-law on our Scots side, understandably, for the reason that made him subject of “Double Genealogy: The Adoption Witness”.2

They equally failed his paternal grandmother on our Norwegian side. Dad identified her as Berthe Mathiesen. Only dates (1860-1887) were provided for her. Perhaps the empty hand was due to deflection to a wrong target, for her actual dates were 1853-1887.1 3

Dad thought she emigrated with her husband in 1882. She detained in Norway though, due to the birth of their fifth child. 3 She, along with their three youngest, did not join him until 1886.3 The eldest two children followed in November of 1887, when they met their newborn  brother, George.

Berith apparently died in 1887, in Wisconsin, after his October birth.1 No US documents have been found for her. She is known to have been in the US only by a ship’s manifest, family lore, and George’s revealing 1900 Census at the home of  his eldest sister.3,4

Here she is, sitting pretty in her 1865 census; Berret Has Mathisdatter.3 The stars seemed to be with us, providing this record of great disclosure: both parents, a grandparent, uncle, eight siblings, precise birth data – who could not follow this one? 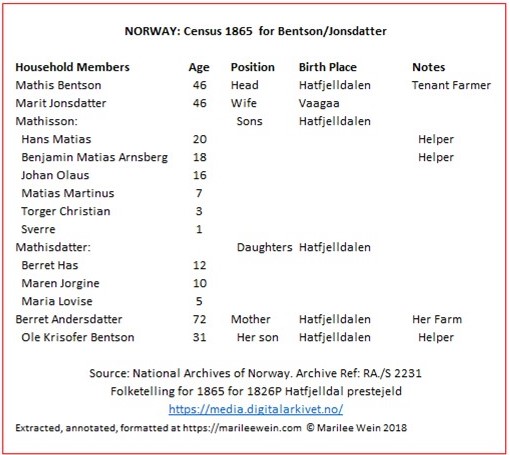 She was born Berith Hass in 1853.3 Still, there had to be a more complex reason than just birth date, name variation and “disappearance” in America, for her to have been missed.

Might Dad have shared an element on which the researcher might conclude that she had no documented path to find?

Dad’s book offered this: “family history passed on to us, indicates the Mathiesens were Jewish”.  We heard the assertion on occasion, growing up. The tidbit is tantalizing because now, we independently have Jewish descendants. This means further research will be biased toward wish for confirmation.

We had no “Mathiesen” ancestors in the search-box sense of a family name handed down over the generations. Norwegian surnames were good for one-generation only because they derived from the forename of ones’ father. So, Mathis Bentsen’s issue was Boy Mathisen or Girl Mathisdatter. (sen was found the more common suffix than son). Berith was of Mathis Bentsen, son of Bendigt Jonsen, son of Jon Olsen, and so on.

Then too, Judaism is an attribute acquired from one’s mother. Our anecdote had likely been heard over generations, by ears that were ignorant of the fact. But Dad did specify “daughter of the Mathiesens who were Jewish” and did not say Berith, herself, was Jewish.

We would be curious to know of Mathis’ status, which would require following Berret Andersdatter. But, Marit Jonsdatter would be our target for conveyable Jewishness. She was daughter of Jon Somebodysen, whose wife was yet undiscovered.

Clearly, we could not afford to lose sight of a single generation for a given individual during the search process, in an ever changing patriarchal forename-becomes-surname dance, tethered to a matriarchal religion descent, toward an abrupt encounter with a non-conforming Jewish name, in the early 18th century.

WHEN THE HEAD HURTS, CHANGE THE SUBJECT

Now Dad was a precise kind of guy. He went on to say “… the Mathiesens who had fled Alsace-Lorraine in the early 18th century and had ended up in Norway”. One had to wonder before proceeding; was the tale a tall one? Perhaps Dad held little stock in it, for he would have known that Alsace-Lorraine was a named entity, only between 1871 and 1918. France had Alsace in the early 18th century, then annexed Lorraine in 1766. The Jews of origin would have claimed either Alsace or Lorraine. The story may have been concocted or, if true, rephrased to the combination, after 1871. If so, it would have happened at the table of those in the 1865 Census.

So, what to plug into the Alsace-Lorraine search box?  Could be Mathiesen; equally, not.  No worries, there is no such box.  Actually, FamilySearch.org, for example, does address ancestry of Alsace and Lorraine, separated for French and German.4 It is presently not digitized and more importantly, not specific to Jews of our limited time frame of interest.

The bottom line; we were not to retrieve any supportive document from Alsace or Lorraine for our Jewishness.  To hazard a guess, no one else had walked away with such evidence, either.

Just because we could not verify, did not make the assertion false. We would persevere.

A sense of Jewish presence in Norway was needed. Not to take the early 18th century dating too literally, we sought data from then, to Berith’s birth.

While it is difficult to get a read of actual numbers of Jews in Norway for particular years or decades, the feel is that they were measured in digits, tens, or maybe low hundreds. The Norway Virtual Jewish History Tour sets today’s Jewish population at 1300 in our more tolerant time. It shows that Jews were hampered by alternating status over many centuries: “you can enter” “now you can’t”. One gets the sense of “don’t linger.”

Our fleeing Jews were to have entered in the early 1700s. That would only have been after gaining special permit from King Fredrick IV, who ruled Denmark and Norway from 1699 to 1730. He followed a banning dictum that his father, Christian V, had re-established.5 They meant business; informants were rewarded. Closer to Berith’s time, but beyond our story line entry date, Jews were banned from the inception of Norway’s Constitution in 1814, through 1851.

Regardless of this paucity of presence, we are reminded that for our purpose, only one was needed.

The Norway registry that held the family birth information was that of Baptism.  Could that have been for “show”? Still clinging and hoping for a clue to hidden Jewishness, we eagerly looked at children’s names on the census. Perhaps Benjamin Matias Arnsberg? Benjamin worked, Arnsberg was a German city, and a third forename was unusual.

Alas, Jews do not name for the living, so the “Matias” thing stood in the way and it was repeated in a couple of sibling names. Now, his baptismal name was nuanced from the census. It was for Benjamin Mikael Arntsberg.3  Mikael was better than Matias; perhaps a secret Jew.

Records of many countries typically sported two witnesses, usually in name only. Norway mercifully threw a party! In fact, the rich detail is a wonderful counterbalance to their search-awkward naming convention. There were many “Arne” in the community records of his ledger. Berg too, in fact, it is the second forename of our grandfather. Tollof Arntsen and Lussi Bentsdatter were two of his baptismal witnesses.3 They were easily identified as his aunt and likely namesake uncle.

Jewish presence was so scarce in Norway that our farmer forebear of say, 1730, would have been awed to meet such unique individual. The story could rewrite to:

“in the early 18th century, an ancestor traded with a Jew in Norway, who was fleeing persecution in Alsace or Lorraine”.

We wished to imagine Merit instructing Berith on punching down the Challah dough for “the Mathiesen’s” Friday evening table. We suspect she did not.

Not properly disproved,  the tale must live on.

3 The National Archives of Norway, the Digital Archives”. https://media.digitalarkivet.no

11 thoughts on “Our Anecdotal Jewishness”

Buttons are provided below  for Amazon & BookLocker.   BookLocker has shipping options for rural addresses.